I just received my new CR10s Pro yesterday. I previously was printing with my Ender 5 Pro. I liked it but wanted to upgrade. I read several reviews and thought the CR10s Pro was what I wanted to get. There were several cons about the CR10s Pro, but none of them seemed to be that much of a problem. So I bought the CR10s Pro and I am very happy with it. I have only used it for a few hours but so far EXCELLENT.
I used the default setup for my printing and have had absolutely no problems (and I forgot to do the 100mm z axis setup.) I have only used it for a few hours, so it's a little too early to really judge how good it is going to be. But started out right.

Creality has fixed many of the cons listed in the reviews I read.
1. Didn't like the capacitive leveler. My version has the BL Touch with inductive leveler.
2. Stage too sticky. Well that is a pulse and minus. The print does stick, but that means no movement during printing and it is a little difficult to pop it off the mat. But it is easy with a tap on the putty knife. I love the feature.
3. I love the simplicity of the printer. Cables neatly tucked away. Screen integrated in the base. One reviewer said the bottom base made it too tall. Mine measures just under 36 inches from the table top, a 30 inch table so total height it around 64 inches. If your ceiling is lower than that -- you have other issues. I store my filament in a food grade sealed bucket under that table. Works great.
4. I don't like the position of the filament reel but there are a few options I will investigate. At the moment, I am just enjoying it.
5. While the cable is bulky, it is a much better arrangement that the Ender 5 with all of the cables running every where. I plan to put it in a enclosure and will improve the cable arrangement there. But even if I don't do that the current setup is very clean.

I will add Swiss Micro heater, enclosure and some other options as I get time. Right now, I am really enjoying the New CR10 s Pro.
Rod

This printer is a workhorse, that’s just a little finicky on the first layer. For the life of me, I can’t figure how to set the z offset, except by pausing the print at the beginning, and manually nudging the z by a whole 1mm. Otherwise, the first layer doesn’t adhere. But once it gets going, it prints like a champ. I’ve been using it almost non-stop since I unpacked it and set it up. Stock, it extrudes through a tube, which tends to result in a lot of nozzle-snot. Also, the crimp that secures the tube to the extruder is a bit chintzy and has already failed (wasting an entire day’s worth of printing) and I had to replace it with the provided spare. I’m here right now in search of a direct drive upgrade kit, but I only see one for the 10s pro, not the 10s pro v2. Just in case, I’m gonna try ordering some spare crimps. Pity, I really wanted to give this one full stars. 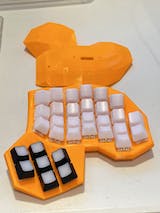 I
I.
Solid machine

I’m on my third and largest print. I am new to printing, and there is a wealth of knowledge. You have to manually adjust the z-axis, and once you do that, you should be good to go. Print slow to start out and clean the print bed w/ isopropyl alcohol every time you use it. If you’re printing at 100, you’re printing too fast. If you want quality prints, print slow (20-30 to start, then 50 once the print is established). Also, print the extra parts like the filament rolly-feeder, the extruder fan duct, and the extruder housing for if they break or you’d like to avoid the filament pulling against the frame. Also, if you want to use TPU, or ABS, the filament feeder needs the clamp adjuster part you fit over the tension spring. You will have consistency and bed adhesion problems if you don't. Luckily they are free on thingverse. Beyond minor tweaks and the wish to use a usb not sd card plug in (There are sd card and computer plug support parts you can print as well), this printer is great. The print quality for the price is unmatched. I might buy a second depending on how this handles week long print jobs. 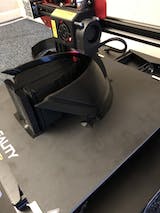 H
H.T.
My 3rd Creality system is the best yet

I just finished the shakedown print for my CR-10s Pro V2 from Amazon, and have to say this is far and away the best Creality machine I have used. It's faster to set up, faster and easier to print, and best over all others in every test I have run so far. My Ender 3 pro and Ender 5 pro will be my workhorse systems, but this will get my prototyping work because of its incredible speed, performance and agility. I also love it because it's part of the Creality family with which I'm already familiar, so I won't be stocking parts in duplicate. Congratulations, Creality! Well done!